I've mentioned before that one of the first things we did after moving in was pull out the horrible red commercial grade carpeting that covered most of the garden level (other than the floors in my office), including the stairs that go up to the living room. 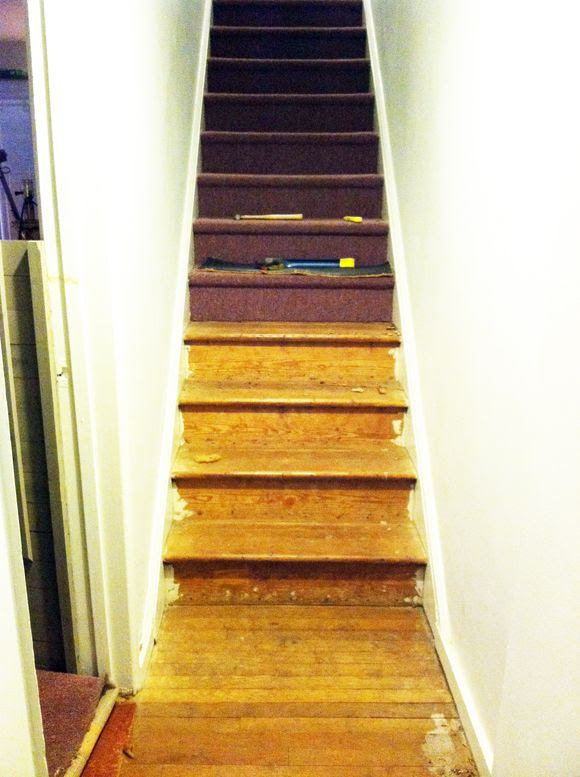 I loathed this carpet and we were relieved to see that the wood under the carpet was in salvageable condition in most places. But when we started pulling off the carpet on the stairs, we were in a different boat. The wood was full of holes and was covered in paint spills and brush marks. 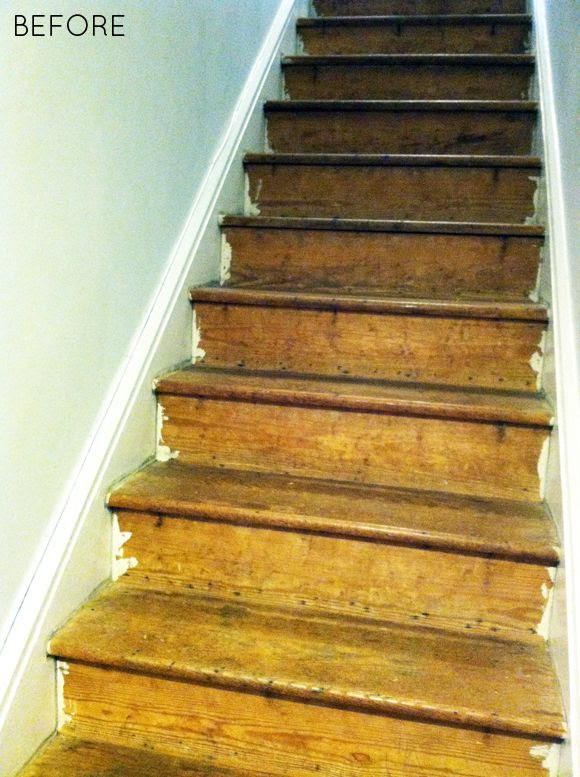 I like the look of a painted stair tread anyway, so I happily painted the stairs white (well, mostly...) before laying down the stair runner (which is really just a bunch of IKEA rugs)! Much better right? 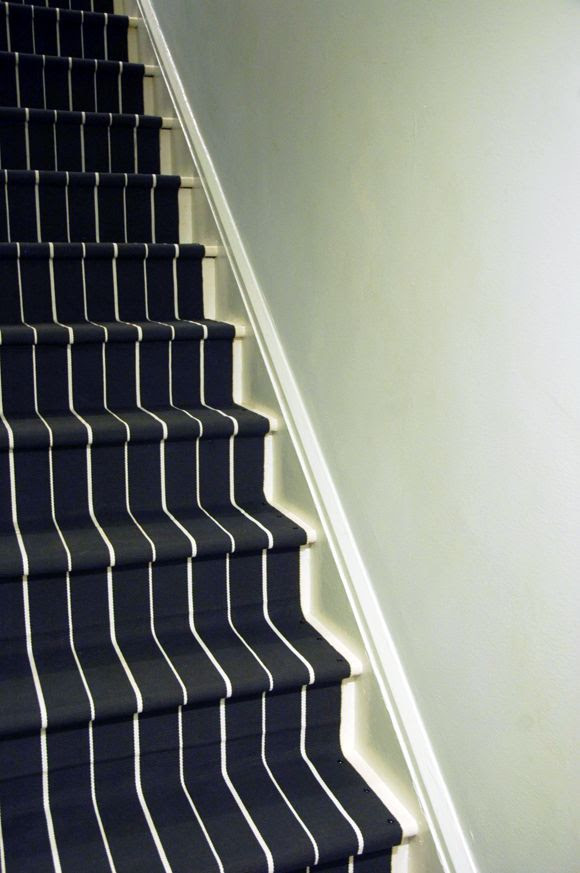 Here's the full run down:

I've come to love and appreciate the power of a sanding block in an old house. Everything in my house looks better after a good rub down with a sanding block! (it'll clean up old bathroom tiles like you wouldn't believe!) I cleaned up as much of bumps and the uneven parts here on the stairs as possible. 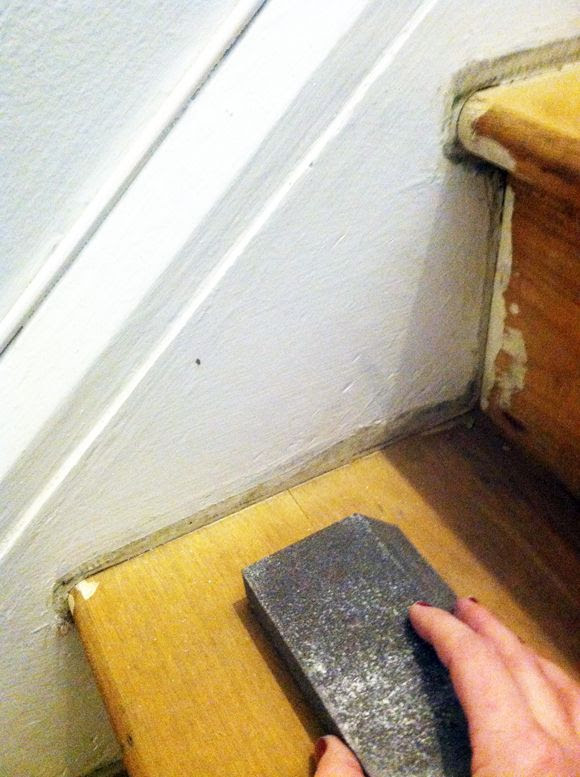 Then I primed and painted just the edges of each step. I was going to paint the whole width, but then I though it might be better to leave the wood in case the owner refinishes the floors in the future. 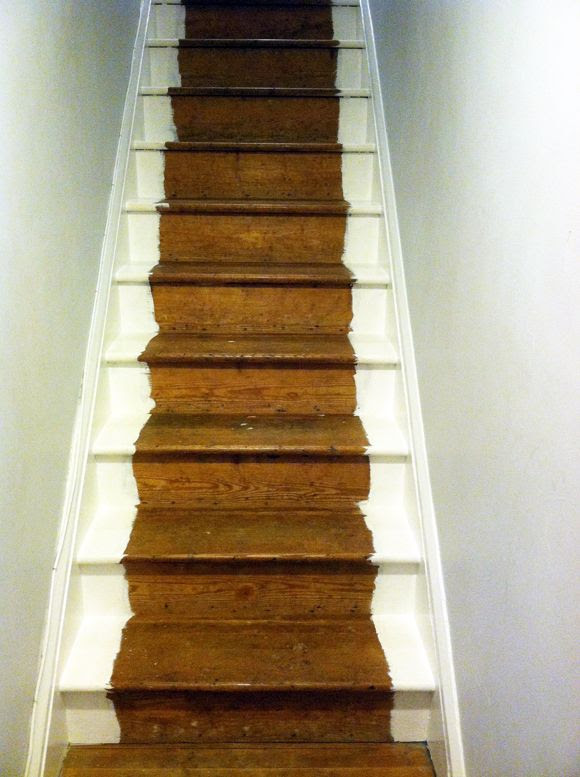 It's CRAZY how much brighter and cleaner the stairwell felt with just those few inches of white paint!

Once the paint was dry, I pulled out a few of these rug grippers I had picked up at the doller store a few months earlier. I swear, the hoarder comes out in me when I go to dollar stores and Target's dollar spot! Bad news. But it worked out for me in this instance. 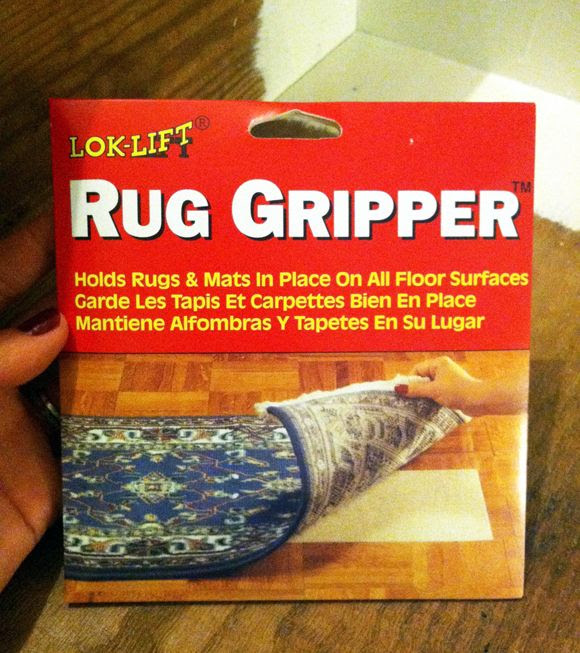 This particular rug pad was the exact size as my stair's tread and it was sticky on the top and bottom, so everything was really held in place. 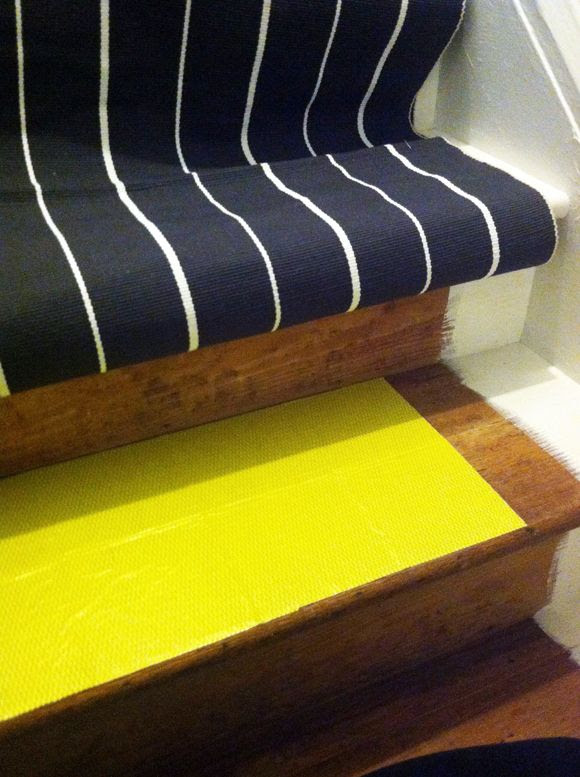 When I ran out of the special rug pads, I move to a runner-sized non-sticky rug pad that I cut to size, and that also worked really great. To tell you the truth I can't tell much of a difference between the stairs with the sticky rug pad and cheapie regular rug pad. So either works well. 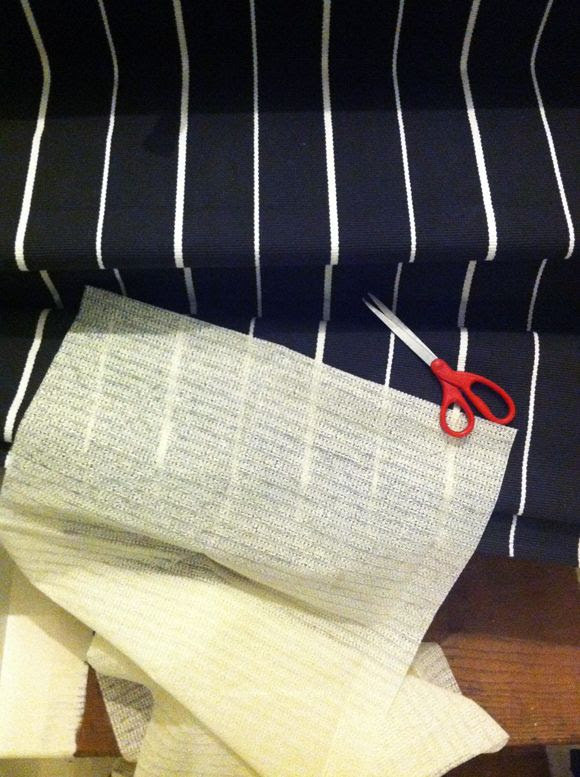 So for the actual rug installation, I used four of these runners from IKEA. They were $25 each and I could get about 3.5 steps done per runner. I started at the TOP of my stairs and used a brad gun with 3/4" brads to secure the runner to just the underside of the step lip. 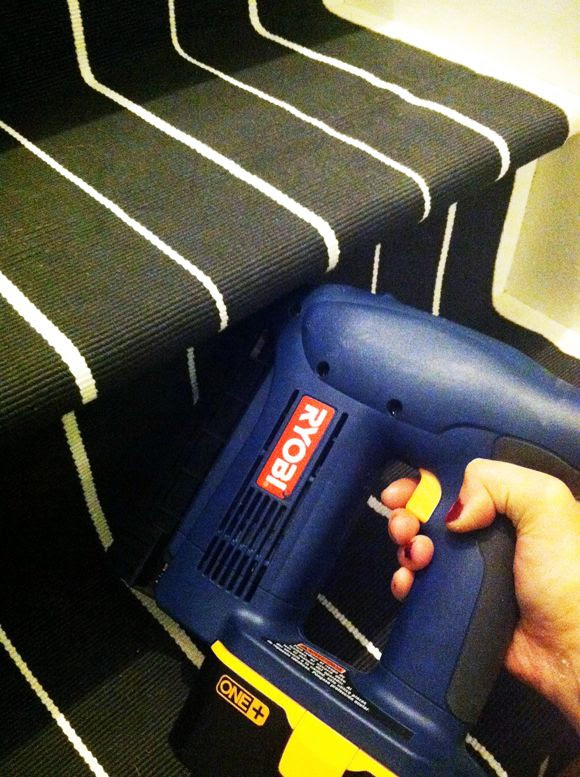 I put in one brad every 2-3" along the width of the stair tread. The rug pads helped the runner stay in place on the riser and the top of the tread, where there were no brads. When I got to the end of my runner, I trimmed off the rolled edge. 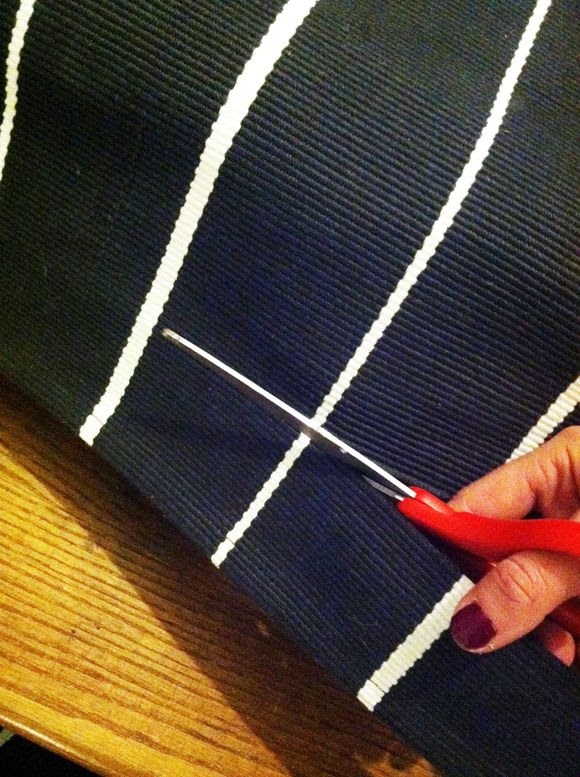 Without the rolled edge, it's easier to layer the start of a new runner on top more seamlessly. 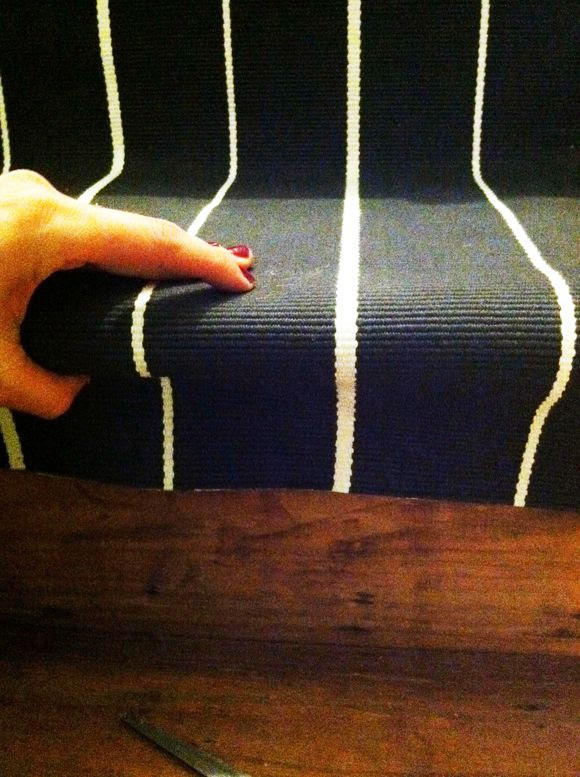 Then you just line up the rolled edge of the next runner and staple in place. 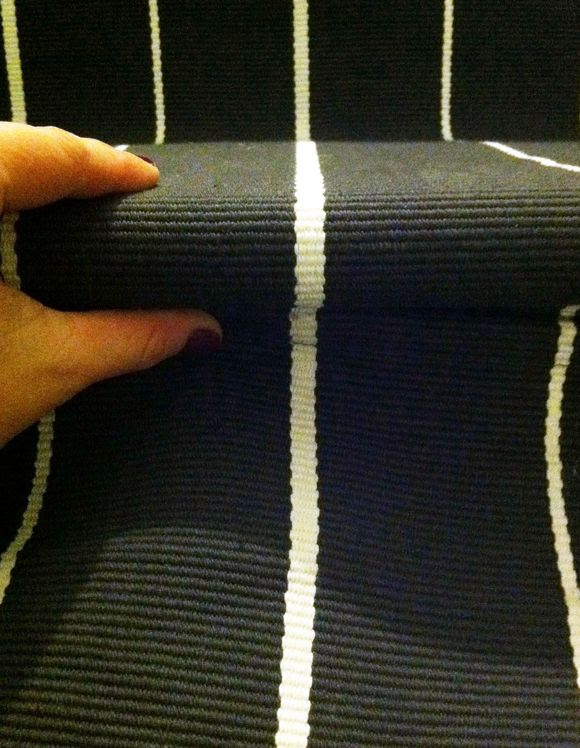 I'll admit, I got a little sloppy when I was doing this project and I wasn't super-duper exact with my lines. From the top of the stairs, you can see the stipes wander a little bit near the center. :( It's not that bad in person, but in this photo, I pretty much want to pull out all the brads up to the middle portion and fix it this second. We'll see how long it'll last crooked I guess.  Learn from my mistake! Measure your edges. Mark it out with chalk maybe to make it a little easier on yourself? 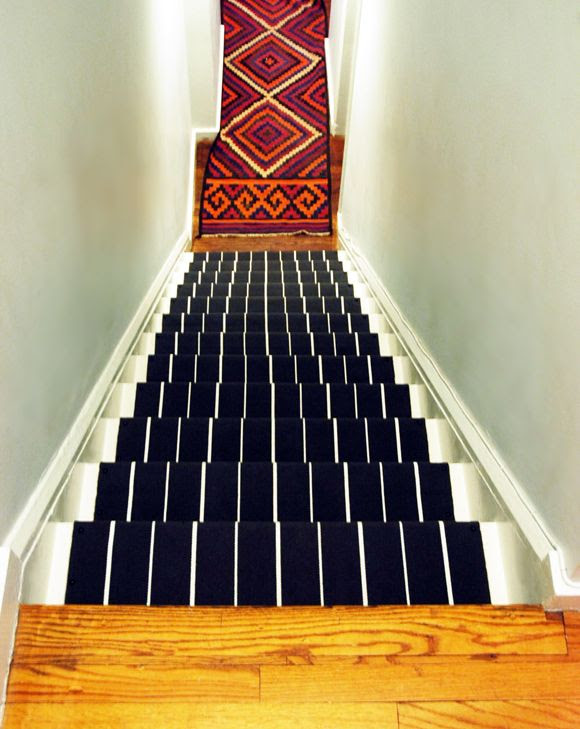 Anyway, the fourth runner was a little short. I could have bought a fifth runner and cut it up for just this bottom riser, but I decided I kind of liked the runner starting a little higher off the floor. I'm calling it a happy mistake. :) 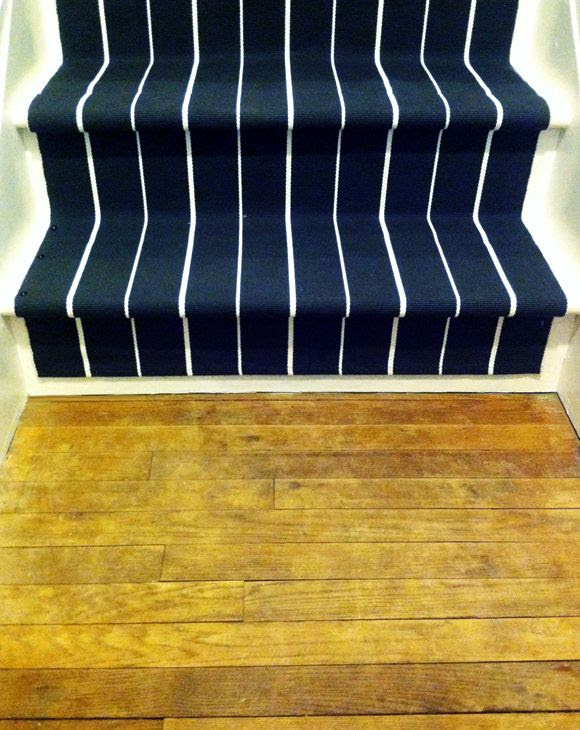 Then to finish up the look and to make sure the runner were completely secure on the stairs, I used three black nail heads (just eye-balled) on each tread (none on the risers). I thought about doing brass, but I really like the tone on tone happening with the black nail head on the charcoal weave. It's a more subtle look. 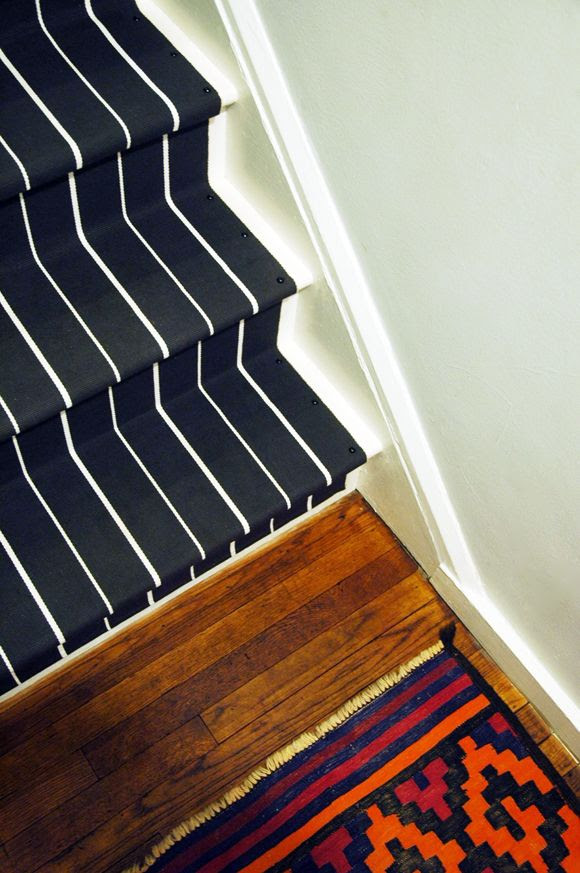 We've been loving our revamped stairs for a couple weeks now, and I am happy with the look and how it's wearing! The dark shows less dirt than I was worried about, and the stairs are much safer now, and about a million times quieter. 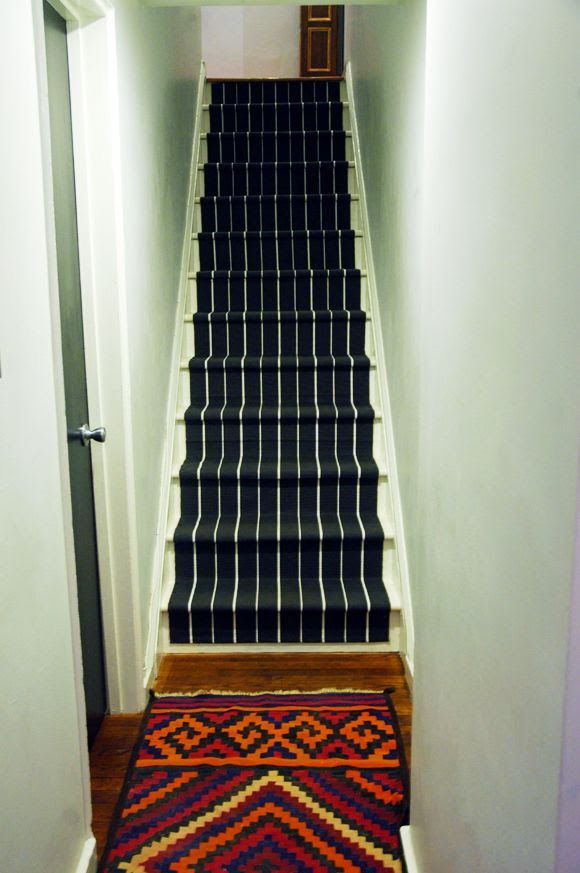 One other thing we did was apply Restor-A-Finish to all the floors that were under the old carpet, and they look SO much better. Much less dry. (compared to a few photos up) 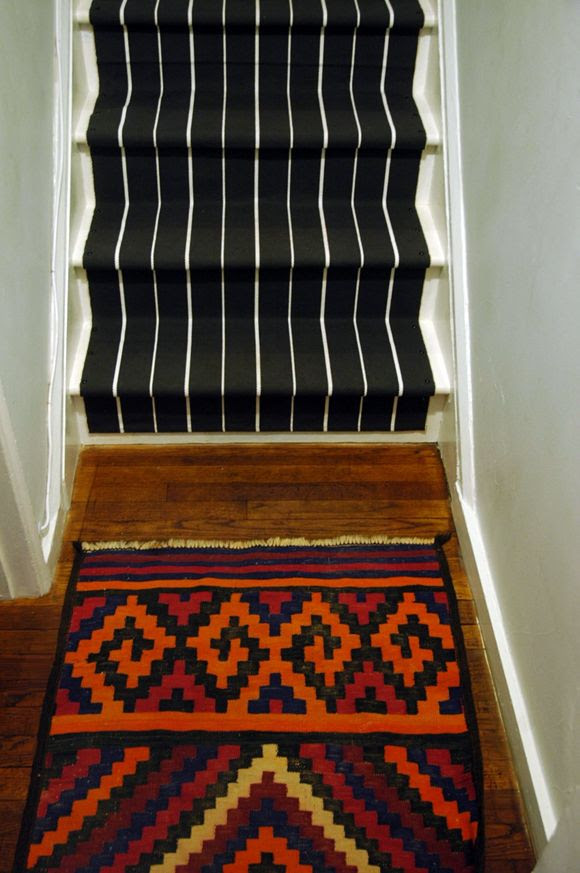 I love seeing the stripes peeking into the living room. :) 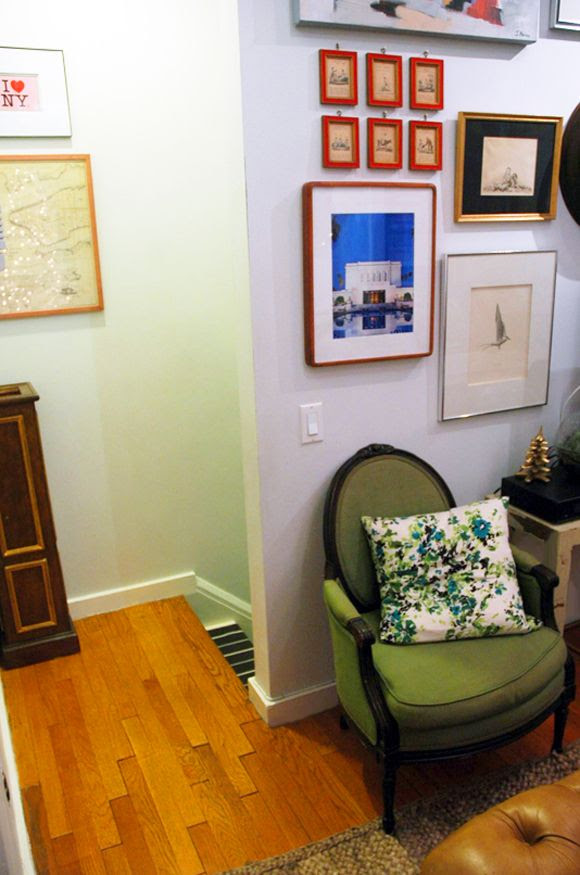 So with the four runners, three packs of nail head trim and a couple dollar store rug pads, I think this project came in under $125.

PS the vintage runner in the hall was a flea market find. It's really long and I was hoping I could use it as a stair runner originally, but we were about three feet too short. Bummer.

PPS Another project from the garden level.
on Monday, December 10, 2012

I so appreciate hearing from you. Nice comments make my day! Thanks for keeping things light here, friends! :)